What does your Seder Plate say about you and your politics?

The Passover story of the ancient Israelites fleeing slavery in Egypt for freedom in their homeland of Jerusalem has become a metaphor for human suffering in the modern day. As a result, the Seder has turned into a stage for political discussion about civil and human rights. In addition to the traditional bitter herbs, charoset, spring vegetable, shank bone, salt water, and egg found on the Seder plate, new symbolic foods are being added to express our individual views about gender issues, animal rights, racism, bigotry, and war. In the early 1980s, Jewish feminist and scholar Susannah Heschel stirred things up by adding an orange to her Seder plate to represent the “inclusion for lesbians, gays, and others who are marginalized by the Jewish community.”1  In 2014, Rabbi Marcus added a big tomato to her Seder plate to bring attention to underpaid/overworked workers in the agriculture/tomato-picking industry.2  To acknowledge powerful female leaders, many households now include a second cup of wine alongside the Prophet Elijah’s to remember the Prophetess Miriam who helped her brother Moses lead the Israelites out of the desert. And for vegetarians, a red beet (similar in color to blood) takes the place of the shank bone to represent the Paschal Sacrifice made the eve of the first Passover, while olives or an olive branch is used to symbolize the hope for peace in the Middle East.

For your Seder this year, will you add something new to your Seder plate and make a statement about one of the many issues our society is struggling with today?
Please send me your ideas!

A Seder Plate for Rosh HaShannah? (It’s not just for Passover!)

Did you know that in some Sephardic homes there is the custom of presenting a special Seder plate before the Rosh HaShanna meal, just like one does for the Passover Seder? Eight symbolic foods (Simanim) are selected and arranged on a platter to ensure a happy, healthy, and prosperous new year, and while certain ones may physically represent an idea (such as using pomegranates to symbolize fertility and abundance because of the many seeds within), another less obvious food choice may be made simply because its name in Hebrew sounds like another Hebrew word with a different meaning (for example: using a leek because its Hebrew word karati sounds like karat meaning “to cut off,” implying the hope of breaking away from one’s enemies). Below is a quick guideline or listing of the types of things often used on a Rosh Hashanna Seder plate:

fertility:
Apples, pears (first fruits of season from the tree,
dipped in honey, sugar, or sesame seeds for abundance and extra sweetness)

good deeds (mitzvot) and abundance:
Pomegranate seeds (belief that there are as many seeds — 613, as there are mitzvot)

peace:
Dates (Hebrew word for date is tamar and is related to word tam meaning, “to end” in hopes
that our enemies will end)

happiness: Gourd, pumpkin, butternut or acorn squash (Hebrew word for gourd is kara, which also means “to announce,” and rhymes with a similar sounding word meaning “to rip apart”)

freedom: Spinach, collard greens, Swiss chard, kale, beet leaves
(Hebrew word for beets is seleka and related to root selek meaning, “to depart” or “remove” implying that enemies and bad luck be taken out; Aramaic word for leafy green, like spinach, is silka)

commemorating tribulations, difficulties, struggles, and hardships of past year:
Savory and bitter foods

NOTE: Some refrain from eating lemon or salt fearing that it will bring bad luck in coming year.

Are we ready for a Thanksgiving Seder plate? 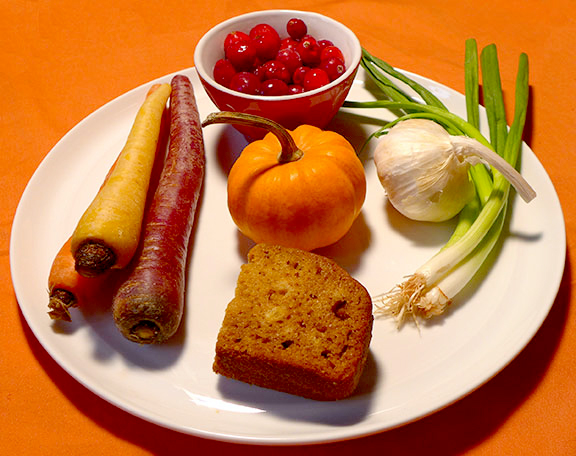 As I continue to work on my Passover cookbook, I am struck by certain parallels between Passover and Thanksgiving. Just as Thanksgiving is the most popular holiday enjoyed in the United States by Americans of all backgrounds (a billion-dollar industry with thousands of cookbooks around one food holiday alone!), Passover is the most loved of all holidays in the Jewish calendar celebrated by Jews from all streams of Judaism. Like Thanksgiving, Passover takes place with family and friends of all generations sitting around a big table (or two) at home, outside of any house of worship. For Thanksgiving, turkey, cranberry sauce, stuffing, and sweet potatoes have become the symbols of the holiday, while matzah, charoset, gefilte fish, chicken soup (with matzah balls), eggs, and either brisket or lamb have become synonymous with Passover here in the United States.

The message behind each occasion also has some striking resemblances. While there may be a bit of a debate these days about the true story behind how Thanksgiving came to be, the overall mood or feeling around this festivity has become one of inclusiveness, sharing, giving, and last but not least: gratefulness. As immigrants from all backgrounds we reflect (if only for a tiny moment between bites of sweet potato pie and savory stuffing) about being lucky to live in “America,” and for having those who are special to us around to share the meal and essentially “break bread.” It also has become a time to pause and think more locally about those of us who are poor, sick, or struggling in other ways, and as a result many volunteer their time to soup kitchens providing free Thanksgiving meals to those in need. While retelling the story of the Exodus from the Bible, we express gratefulness for our ancestors being released from slavery in Egypt, making their journey through the desert to Jerusalem, and for us surviving as a people time and time again. In my interviews of individuals from all over the world for my Passover cookbook, many have shared with me their stories of making a concerted effort to invite any Jews into their home for the Passover Seders so that they would not be alone and would have a place to eat and “break matzah” with others. (And we can’t forget about the custom of setting out a glass of wine and opening up the door for Elijah, the prophet and eternal guest.)

Some individuals and Jewish organizations have even taken up this opportunity to take aspects of the Passover Seder and weave them into their Thanksgiving meals. During these meals, mini Haggadot or prayer booklets are distributed at the table to discuss the topics of “Struggle, Freedom, and Gratitude” as a universal concept.

Maybe this is the time to create a new Seder plate for Thanksgiving,
one that would include various foods to represent the following principles:

QUESTION: What would you put on your Thanksgiving Seder plate?

One of the most popular dishes on the Seder table is charoset, the fruity spread used to symbolize the sweetness of our ancestors’ freedom from slavery. In every Jewish culture there is a charoset that reflects the unique ingredients of the region. While the most traditional charoset that Ashkenazim (Germanic and other Eastern European Jews) prepare consists of finely chopped apples, walnuts, wine, cinnamon, and some sugar, most Middle Eastern and Mediterranean communities use dried dates as their base, adding other dried fruit (such as raisins and figs), along with varying spices and nuts. The charoset takes center stage on he Seder plate, and is the dish where one can be most creative. Below is my recipe for a Syrian charoset that uses dried apricots in place of the usual dates in most Middle Eastern charosets (in Syria they also do a charoset with dates sometimes mixed with the apricots). The orange color of the apricots really brightens up the Seder plate and table, and the sweet-tart flavor is especially nice if you find pure dates to be too sweet.

1. Combine apricots, orange juice, water, and sugar in a small saucepan and bring to a boil over medium-high heat. Reduce the heat to medium-low and simmer, covered, until apricots are very soft and mushy, 30 to 40 minutes. (Make sure to stir every 5 to 10 minutes to prevent burning.)

2. Pour hot apricot mixture into a food processor and add the lemon juice and orange blossom water. Pulse 1 to 2 minutes until a smooth paste. Scoop out into a medium sized bowl and mix in the chopped nuts by hand. Cool to room temperature.

3. Serve charoset at room temperature in a small, decorative bowl garnished with the pistachios
or almonds.

Make your own falafel sandwich night!
When Christmas Eve falls on Shabbat (or Shabbat falls on Christmas Eve?) it’s the perfect time for a challah-baking lesson!
So is it strange to think that your new pot is beautiful? This is my belated Hanukkah gift to myself. I have plans to make some very good stews, rice dishes, and breads in the coming winter months!