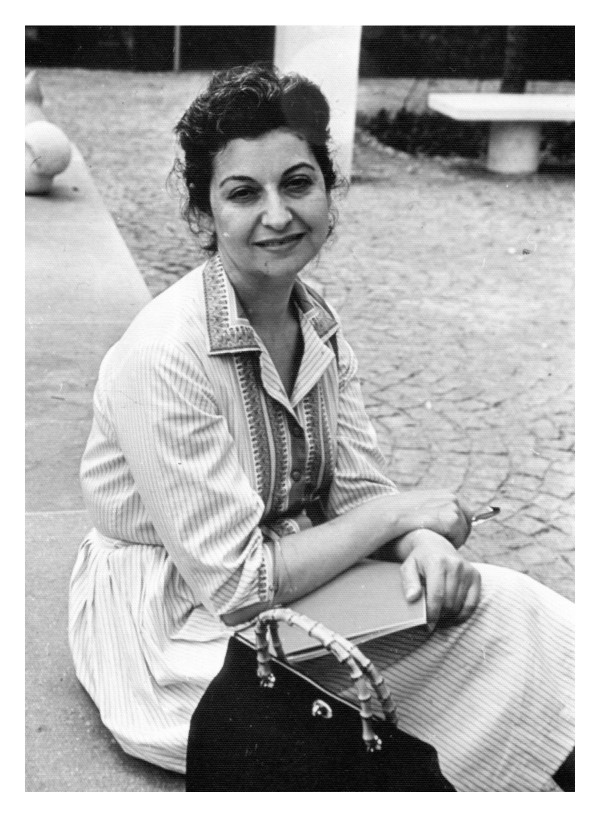 On May 22, 2001, Grandma Fritzie passed away on Manhattan’s Upper West Side.
I have been thinking a lot about her lately.

Only a week ago I received an email by a woman named Francine in Tucson who had purchased  a lithograph by my grandmother at an estate sale.

After doing a search online Francine came across my website and information about the life of my grandmother. She was intrigued by her strong personality and drive to be a female artist in the sixties and seventies, and was reminded of her own Brooklyn born Italian-American family, with their large family gatherings that centered around great food. When I received this email with the photo of my grandmother’s lithograph, I was happy to know that her artwork was keeping the memory of her alive.

Unfortunately Grandma Fritzie never got to see my cookbook “A Fistful of Lentils: Syrian-Jewish Recipes From Grandma Fritzie’s Kitchen” when it was officially printed in 2002. But I am so very grateful that I spent so much personal time with her while writing it. This book was what brought me into the world of recipe recording and teaching, and Syrian food was my first lesson. 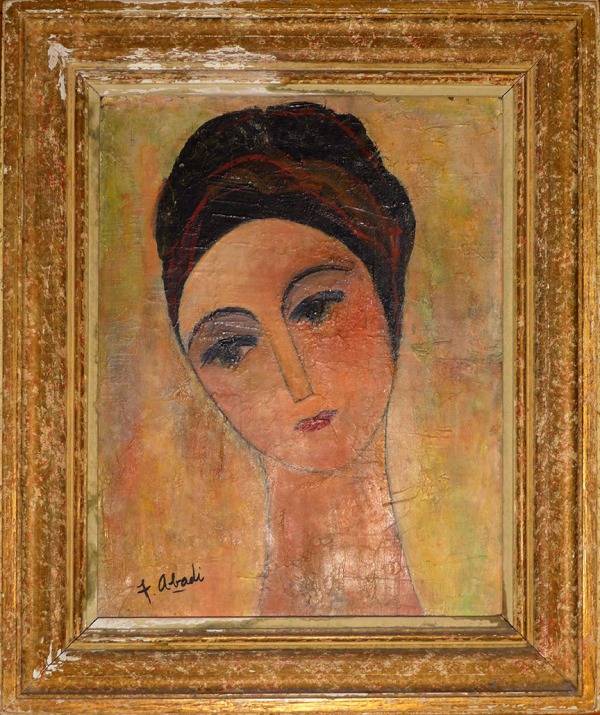 Painting by my grandmother hanging in my apartment, possibly a self portrait from the 1960s

Very recently I received a letter from the publisher that all rights to the cookbook had been reverted back to me. My first reaction was to feel sad because I thought that if my cookbook was no longer being printed, my grandmother’s, mother’s and family’s stories and recipes would be forgotten (which was the whole point of writing this book to begin with!). But then I realized this was an opportunity for me to take back my book and relaunch it with revised (and possibly even new) recipes. I have learned a lot about self-publishing this last year when “Too Good To Passover” was released in January, and it almost feels like “A Fistful of Lentils” has finally come back home to me in my care.

By the end of this year I hope to relaunch a new edition to “A Fistful of Lentils” that will continue to keep my family’s stories and recipes, and the Syrian-Jewish culture alive. Stay tuned!

It’s Recipe Testing Time! A dinner party where everyone else does the cooking. 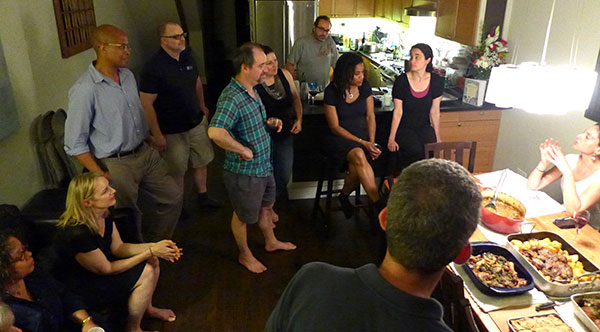 Me (on far right) providing information about the varying dishes prepared, and the countries they are from.

It’s the season for recipe testing for my Passover cookbook, and as I did with my first cookbook
(A Fistful of Lentils) I have decided to distribute various recipes to friends, acquaintances, family members, and willing participants to see how they would play out in the general field. It’s a bit nerve wracking for me, as unlike in a cooking class where I am able to give guidance to a student, in this case I am sending my instructions out and have no idea how it will return. What if after writing all of these recipes, many of them just don’t work or taste good? What if I have to rewrite them all? It’s also a bit tricky to find the perfect recipe tester. While someone who is anxious around the kitchen and does not know the basics of cooking may not be the best one to rely upon, expert cooks can be too creative, refusing to follow anyone else’s instructions but their own. The best tester I have found is one that likes to cook, but prefers some structure. I need a perfectionist.

So here’s how it all worked: I send out an invitation to a dinner party,
but the catch was that I would be the only person NOT cooking.
With the invitation also came rules:
–Select one or two recipes from the list I have attached that appeal to you.
–Please follow recipe EXACTLY as I have written, following all measurements (including weight),
steps, and ingredients I have listed (no substitutes).
–If anything does not make sense, please call, text, email me at any time!
–Take notes on the recipe you have printed out and bring them along with you
to the dinner along with the dish. (Things to look out for and note: cooking time is out of range,
steps are confusing, yield is totally off, ingredient amounts appear to be too much or too little
— in this case you should contact me before proceeding.)
–If you normally prefer to leave out salt (or sugar) in your food,
please do not cut it out or reduce the amount when following my recipe.
–Try to to have fun 🙂

Thus far I have conducted two different recipe testing dinner parties, and overall the results have been good. Most of the feedback has been that the steps were clear and organized, and that they liked the recipe and would do it again. Some even said that they enjoyed being challenged with a recipe from a particular part of the world that they normally would never make, and even felt better about having structure without the pressure of improvisation. Still others expressed how they were a bit skeptical about some parts of the recipe, and were either pleasantly surprised or had suggestions with how to improve it. The following are some examples of what was made and the reviews from the cooks who prepared them. With each recipe (some more, some less) I obtained some valuable information about how to improve them. 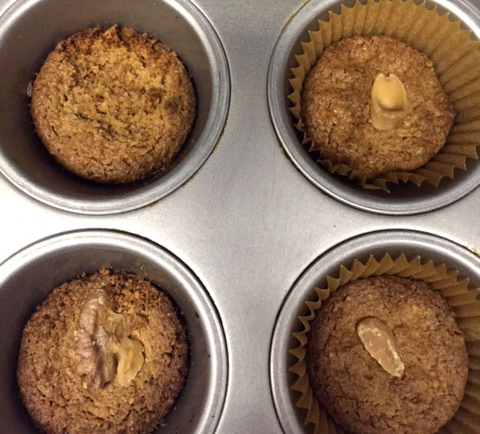 Lentichi (Italian Lentil Salad with Red Bell Peppers, Red Onion, and Olive Oil), prepared by Manon. Comments: Recipe easy to follow and even though I normally don’t like lentils, I really liked the flavor of this salad; Thought note about cooking lentils just until chewy or al dente was a good description to prevent me from overcooking them. 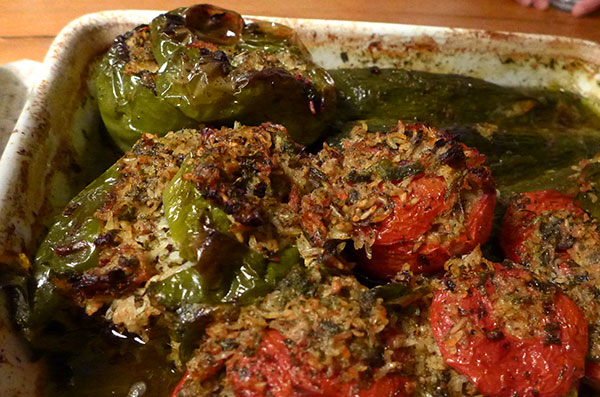 Dolmas de Verduras (Greek Stuffed Mixed Vegetables with Ground Lamb, Rice, Lemon, and Mint), prepared by Jim. Comments: The dish took a lot longer to prepare than I thought it would (although you did say to bake it for several hours); I had to buy a corer, but once I had it I enjoyed learning how to scoop out the zucchini. I love this type of dish and would definitely make it again (but would leave more time and maybe not prepare it on a very hot summer day!). 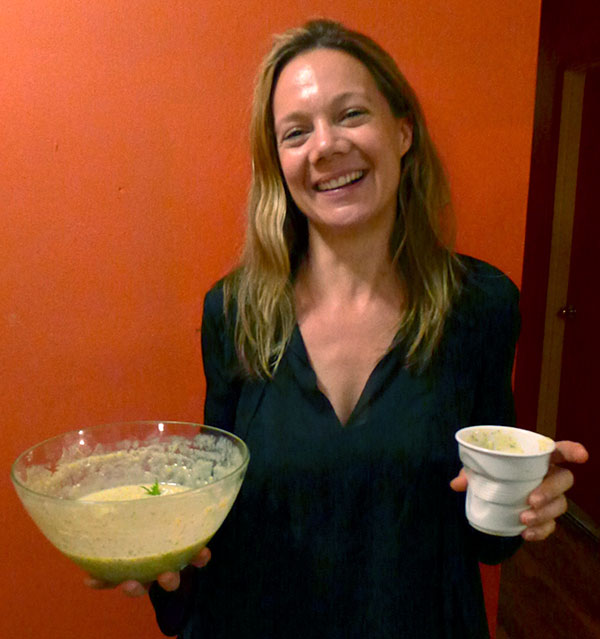 Panada (Greek Egg-Lemon Soup), prepared by Jeanne. Comments: I had to use nearly 6 lemons (as opposed to your suggested “3”) and still did not obtain the full cup of juice needed. At first I thought that the taste was a bit too lemony, but overall flavor is still delicious and I loved the addition of mint (good as a sauce too!). Recipe very easy to follow.

Maf’rum (Libyan Fried Potato-Beef “Sandwiches” with Tomatoes, Onions, and Cinnamon), prepared by Nacer and Kim. Comments: Most of recipe was well written, but at some points we were a little confused by exactly how to cut the potato slices (a photo or illustration in the final cookbook may be a good idea for this recipe). It was helpful that you gave a visual description of just how the potato should look once cut properly; You might want to change “finely chopped” carrots to “finely diced,” as the shape and size might be better understood. Although challenging, this is the type of recipe we would do again! (And we would try to work on slicing the potatoes even thinner.)

Mashwiy’yah (Tunisian Roasted Tomato and Sweet Red Pepper Salad with Garlic and Olive Oil), prepared by Sam. Comments: The recipe was clear and easy to follow, but you might want to warn people that they have to allow time to properly peel the thin skins off of each pepper after being roasted. It’s not a difficult dish to do, but to do it right, it takes time and care! 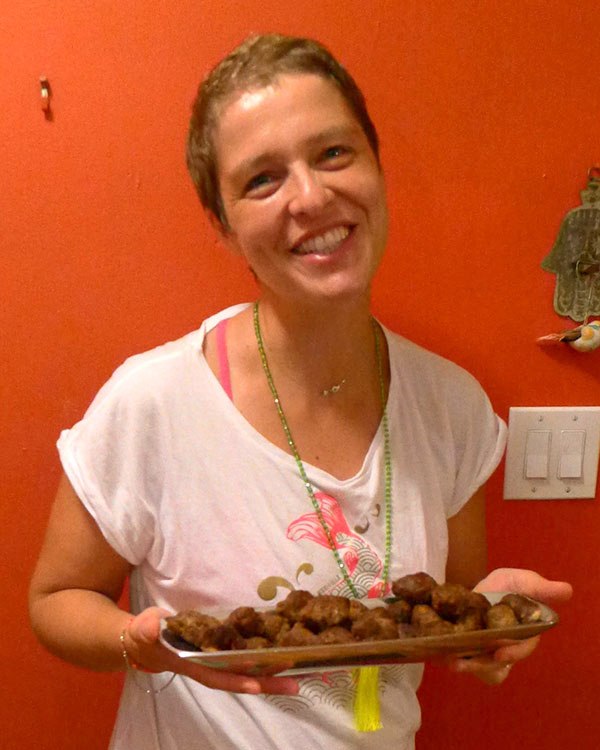 Alheira de Mirandela (Portuguese Veal, Beef, and Chicken Sausages with Garlic and Smoked Paprika), prepared by Alexana. Comments: I followed this recipe EXACTLY, and even bought measuring cups and spoons to do it! I’m not sure if it came out right, and my husband said that it tasted good (but that it “wasn’t like Jennifer’s”).