Silan Date Honey: A charoset for all year-round? 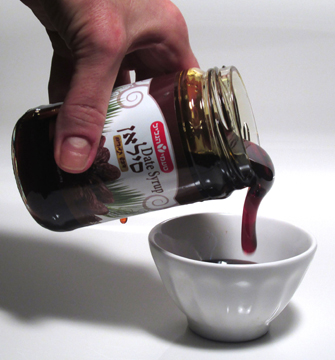 Yesterday I was reviewing my Passover food interviews from Iraqi Jews, and found it interesting that in all of them the individuals described their charoset as not so much of a date purée, but of one resembling molasses. This thick syrup (called silan) was sometimes mixed with chopped walnuts, almonds, or pistachios. At their Seder, they would either drizzle it on the matzah or dip the matzah (as well as bitter herbs) directly into it. In my interviews with Iraqi Jews that had at some point moved on to other countries in Asia, Southeast Asia, and Central Asia (such as India, Bornea, Singapore, or Iran), the description was the same, but instead of silan they called it halék/halech. I have been trying to find out the origin of both of these words and see if there is any specific meaning (such as “honey,” “syrup,” “molasses,” or “jam”), but I have not been so far successful. It sounds very much like an Arabic word but perhaps from an ancient dialect?

What is also interesting is how timely my research is on this particular subject. While speaking with a Yemenite Israeli yesterday (the same day I had been researching silan), the first thing that she asked me was, “Jennifer, have you ever heard of something called ‘silan’? I just returned from Israel and it is such a craze over there now. They are doing everything with it!” She went on to tell me how one friend mixed it in with tahini to make some kind of nutty sweet, and how chefs in restaurants were putting it in and on everything. I too had found that the trend was hitting over here in the U.S. In my searches online for “silan”, all kinds of recipes were popping up, including a cauliflower dish that called for it drizzled on top. In fact during this recent Passover I was able to find a jar of it in my local kosher market, which I bought right away and still have.

So my questions still remain:
What is SILAN and how is it different from and/or related to HALEK?
Does anyone out there (who is NOT from the Iraqi community) also call their charoset
by one of these names, and if so, where are you from?

4 thoughts on “Silan Date Honey: A charoset for all year-round?”

In the Musée Alsace I discovered this particular metal pitcher for beer and wine that appeared to have the Star of David painted on the front. But upon reading the caption I learned that this “6-branched star” was a common type of symbol or badge used by beer makers in the region.
Traditional pain d’épices (spice bread) by the kilo in Strasbourg, France: the predecessor to American gingerbread.
A bit of Jewish history at the Historical Museum of the City of Strasbourg, France.